Sailing into the Past

I don't know if you remember, but in the back of old, popular magazines and comics, there were these ads with a kinda wimpy guy having sand kicked in his face. The ad promised if only you'd buy their magic elixir or special device, you could bulk-up and no one would bully you around anymore. Now truthfully, looking like Schwartzneger was never high on my dream list, but sailing on a 12 Meter boat -- well, I didn't think it was likely to happen in my lifetime.

So I'm leafing through my copy of WoodenBoat Magazine and to my amazement, WoodenBoat is offering an opportunity to participate as crew in a 12 Meter regatta. I faxed off the form, sent in my money, and eat your heart out Jane Fonda, I found myself in September 1997 driving up to Newport, Rhode Island to participate in what they claimed was the largest regatta of U.S. wooden 12 meter boats ever - 9 classic boats.

I need to make a small admission here. I don't race. If I needed more stress in my life, I'd just go into work on weekends. I cruise. I relax. Maybe I can do one pull-up. With a running start. The great thing was that in the letter Carl Cramer, the editor of WoodenBoat and organizer of this event sent out, he set the priorities as (1). safety, (2). fun, (3). fast, which seemed about right to me. I did actually crank up my normal daily exercise bike level a couple of notches, so I wouldn't be totally exhausted, but I knew I'd never be able to grind at a reasonable level.

My second admission: I am not a big America's Cup fanatic. We had to choose a vessel from amongst the 9 boats, so I picked Intrepid, which seemed like a famous name. I immediately called up Mystic Seaport Bookstore to get an America's Cup book, so I could at least see what Intrepid and some of the other boats looked like. I wasn't totally heartbroken, when I got a letter saying Intrepid was not going to be ready in time and would I be interested in sailing on the WoodenBoat team's 12meter, Northern Light (US 14), built in 1938, designed by Olin Stephens and built at the Nevins boatyard on City Island. I of course said yes. The WoodenBoat crew would sail on Valiant.

One of the other crew, Rob, sent out a letter asking if we all would be interested in caps, which he would organize. The answer was obviously yes, and along with his suggestion that we all wear white shirts, we were clearly one of the best attired boats in the fleet. Knowing (after reading the book I purchased from Mystic) that 12 meters were raced in America's Cups from the mid-fifties to the Australian victory in the early eighties, I left work at noon on Thursday, cranked on an oldies rock station and headed out to sail into the past.

The regatta was Saturday and Sunday, so I spent Friday touristing in Newport. The weather was gorgeous (ok, I admit it - I pulled down weather maps from the internet each day for the previous week to keep my skills from the weather course I took in shape, and also to psych myself up.). I toured the Museum of Yachting, which was the race venue, and the Naval War College Museum, which had an exhibit about Teddy Roosevelt and the Navy, which was quite well done. Ok. I admit it. I also did part of the cliff walk and toured the Breakers, the Vanderbilt summer home. Quite impressive. I then just walked around downtown to get the full tourist flavor.

In one of the shops, they had a poster for a 49er regatta taking place that weekend off Goat Island. The 49er is the new olympic boat that replaced, I believe, the Star. It was too late in the day to go see them, but they were on the water while we were racing. Given the choice between having the Vanderbilt dollars or being young enough, fit enough, and a good enough sailor to not die while sailing the 49er, I know which I would choose. It is really ballet to see these boats fly over the water, and the dance that the crew has to do to keep them upright.

Friday night we gather under a tent outside the Museum of Yachting to meet the rest of the crew. Each boat is provided with a professional crew, in our case Greg the captain, Adam the first mate, and Deb the second. Also onboard are two luminaries, Meade Gougeon (of West System fame - one of the Glues Brothers) and Peter(?). Then there were the 12 of us, all at varying levels of sailing ability, from the very good, to the well, uh, able to take instruction if spoken to slowly, like me. Two of the folks were from Argentina, and one from Australia, as well as folks from all over the U.S.

As I was talking with folks, a guy comes up to me and says, "Hi, I'm Kevin." And sure enough, one of the co-students from my grad school days was there. Haven't seen him in a good 15 years. It's a good thing he has a good memory, for though I recognized him, I couldn't remember from where in my checkered history he came from.

Saturday. Continental breakfast and we're off. The boats are rafted along side, so you can see the differences in rigging and layout of the different boats. I throw my bag below, and am standing around being a little bit overwhelmed. A person crossing our boat to get to the next one stops and asks, "Did you take a course at Offshore Sailing about 5 years ago on City Island?" Yes, it was the instructor from that course. He said it was quite an experience to sail among all the celebrity boats, not just the 12s but all the other historic and beautiful boats in Newport. And he was right. Before that momement I hadn't connected that I had actually sailed out City Island, where Northern Light had been built.

It is an unbelievable day. 10-15kts of wind. Maybe 1ft seas. Sunshine morning leading into a mostly overcast afternoon. I end up on the foredeck, initially responsible (along with 2 others, and Adam) to get the jib around on tacks. Eventually, I will graduate to add running the inboard end of the pole up and down, but that will be Sunday. It is a major pain in the butt getting the jib around. The stays are flattened, not round and the sail get stuck on everything. If the jib doesn't come around, it makes it harder on the grinders, who are having massive troubles anyway, since we are flying the number 1 jib, which is huge. Seriously large. Basically if they can grind the sail in before it fills it's easier. If we are slow in getting the jib around, they have to grind it in, while full of wind, it's HARD. Hints from aft float forward that we should get the sail around. We get better at doing this, with encouragement.

Mostly though, I'm rail meat, or deck jewelery, since I sit on the upwind rail along with everyone else trying to keep the boat flatter. Time to take pictures of the boats ahead of us (boo!) and behind us (yea!), as well as the spectators. The boat tends to sail at, oh 30 or 40 degrees over on its side, so gravity is slightly screwy.

There were 3 races on the first day. We came in 5th, 5th and 3rd, so at least we were improving. We finished about 4pm, and there was a dinner under the tent at 6:30. While standing in line for food, this guy comes up to me and says, "Were you in a course at Offshore Sailing about 7 years ago?" Yes, shock and surprise, not only was the instructor from that course there, so was another of the students, who actually hadn't seen the instructor yet. Yes, this really was a sail into the past. The meal was followed by talks about the boats, but I excused myself early, as I couldn't keep my eyes open. A tiny bit of rain fell doing some of the talks. 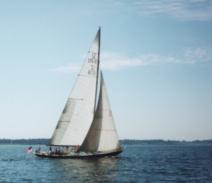 Next morning, I was stiff. I dunno. For not doing all that much, I really had some difficulties walking about 3 blocks to the 7-11 to pick up a paper. It was another outstanding day. Similar to Saturday, but with a bit less wind. Another quick breakfast and we were on the boat. Same position, but today I got to raise and lower the pole. I do need to work on my DEA (dynamic environment awareness), since at at least one mark I needed to be reminded that it was time to play with the pole. No matter. My smile muscles were fully on. [I guess I should explain this. It seems in racing, you don't say, "trim in the jib", but instead you say, "trim on." You don't say, "here's a puff," but instead you say, "puff on." So I guess I was smile on. While I'm doing my lexigraphical work here, I should note that heating up, means increasing speed - which on the wind means falling off for a few seconds. I know what being lifted is, but I actually missed what being "knocked" is. Maybe headed?]

Unfortunately, just as we were making a brilliant start on the first race of the day, two of the vessels collided. I didn't see it, but Nefertiti had a large hole in its side. Luckily no one was hurt, and they were able to sail the vessel back inside to a boat yard. The 12s all went back inside. After Nefertiti was taken care of its crew members were transferred to the other vessels. Five boats, including Northern Light decided to continue racing, while two decided to day sail. One of the day sailors, actually raised their spinnaker, which was probably exciting (it was decided - quite reasonably, that the racing boats would not use spinnakers - just poled out jibs). So with a number 3 jib, we resumed racing. Continuing our improvement, in the two races of the day we came in 3rd and then 1st.

The accident tempered a bit the pleasure of the second day's sail. I think sailing is like that though. Despite racing, the shoals didn't go away. Buoys had to be obeyed. Obstacles are always out there and even in cruising lack of vigilance, even for a moment can be repayed with unpleasantness. In one interlude, Rob spoke of dividing the world into reality, "whatever your reality is," and dreams. Now that this dream of sailing a 12 meter boat is part of my reality, I'll have to up the ante for my dreams.

Click on anchor to return to main sailing page