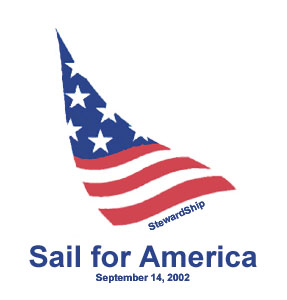 As you are sailing up the approaches to New York Harbor, through the Lower New York Bay, under the Verrazano Narrows Bridge, and into the Upper Bay, the moment arrives when you can first just see the base of Manhattan, the Battery, and the Hudson River. Whether you are pulling into the harbor on a cruise ship, sailing with two thousand of your best friends, or on a 29 foot C&C fiberglass sailboat with a crew of 3, it is an impressive sight. On September 14, 2002, sailing with my friends Dave and Annie Steward on their sailboat, StewardShip our breath was literally taken away as we came to this point and saw the mouth of the Hudson brimming with sailboats. There were shore-to-shore white sails, punctuated with the occasional spinnaker, many displaying red, white and blue motifs. Everywhere you looked, converging on the tip of Manhattan, were white sails. It was a moment that can not be captured in words or on film, try hard though I may, but will live on in my mind's eye.

The event that drew these boats to New York Harbor was Sail for America, with the goal "To have the greatest gathering of sailboats ever in the history of the [New York] harbor," with three clear goals:

For me, the day began at 4am, when I awoke a half hour before my alarm was supposed to roust me. I had promised Dave that I would be at his boat, moored off Perth Amboy at the Raritan Yacht Club by 6:45am, so that we would be at the rendezvous point for the RYC boats by 7:30. Traffic on Routes 287, 24, 78 and the Garden State Parkway was light at that time in the morning, so I was at the launch at 6:35am and clambered aboard the boat right on time. At 7am we were engine on and warming up, looking around to see when other boats were going to start out. As Dave took us off the mooring, I went below to string the Memorial Flags together, so we could fly them from the boat.

Sail for America organized a sponsorship program to have a personalized flag, 2' x 3' made to remember each person who was lost on 9/11, and have these flags flown by the boats. Our boat was privileged to fly flags for the following 10 people:

Dave's plan was to tie the flags onto a length of rope, and then hoist the rope and flags with the spinnaker halyard. The 10 flags, with appropriate spacing, would extend for most of the height of our mast. I think we all felt responsible that we do our very best with these flags and for the people and families they represented. My two small worries were running out of line before I reached the last flag, and getting one or more flags upside down. Luckily neither problem arose.

Dave and I traded places, and while I helmed us along the south shore of Staten Island, Dave filled out the paperwork for the flags. Each flag had a form that needed to be completed describing the boat and other such information, which would be returned with the flag to the flag sponsors. Keeping my usual weather eye, I looked straight up, and there in the ice crystals of the high cirrus clouds was a tiny rainbow (maybe 10 degrees long). It seem an auspicious start. At about 10am, the flotilla from RYC arrived at the staging area for Fleet C at Gravesend Bay, near the Verrazano Narrows Bridge.

In some ways, I guess, this day began for me on the previous Wednesday evening, when Dave called and asked me if I'd be interested in joining him. I checked my calendar, and I had a play and a local community health day scheduled, so I declined his offer. Of course my little brain couldn't help but think that this was a once in a lifetime opportunity, and that this was a nice way to make a positive statement about 9/11 and reflect that we've all learned that life is what happens while you are making other plans, so within a half hour I called back, reached Annie and said I'd go.

After signing on, the first thing I did was check the weather. The National Weather Service was predicting an -interesting- day. With tropical storm Hanna moving up the East Coast, they were predicting winds from the South, starting early in the day at 10 knots and building possibly to 20 knots, but no rain till Sunday. Now, I'm the type of sailor who if you tell me that one million people are going one way, I'd much prefer to go the other. If the forecast 20 knots of wind arrived, and we had a tight formation with lots of sailboats, it would be a most interesting day indeed. A combination of superstition and experience with forecasts led me to pack my light foul weather gear, just in case. The Sail for America site provided tide information, and basically we'd have the tide with us up the river and against us down the river, so we'd have both wind and tide against us most of the way home. It would be a long day.

By Friday night, the weather forecast hadn't changed much, except the rain was predicted after midnight, and there was some question about how much moisture would be sucked in from Hanna as the front passed. When I arrived on the boat, Saturday morning, there was no sign of the 10 knots of wind, as the water was a mirror. It was a beautiful "red sky in the morning, sailors take warning" sunrise, though. As we motored over to Gravesend Bay, the wind began to fill from the South some and while "milling about smartly" we raised the main sail and moved the Memorial Flags a bit forward, so they could be seen. We were now flying the RYC burgee and Sail for America flag from the signal halyard, the Memorial Flags from the spinnaker halyard, The Sailing Club burgee from the backstay, and the Stars and Strips on the stern.

At Gravesend Bay, we became part of Fleet C. Joining sailboats already in the harbor were three fleets. Fleet A assembled just north of the George Washington Bridge, Fleet B assembled east of the Throgs Neck Bridge, and we assembled just south of the Verrazano, with each fleet's starting time arranged so that they met up at the base of Manhattan together. I must say, given the logistical nightmare of this event, Sail for America did a remarkable job. The Fleet C controller kept the boats well informed via VHF. Definitely a tip-of-the-cap to the organizers for doing a great job. The boats departed the staging area by length, with boats our size heading out at 11:25am, when we joined the parade.

The Fleet C controller sailboat moved to the head of the fleet. As they passed the review stand, in one of the financial buildings, where the families were, they read a short statement over the VHF. We were too busy sailing for me to note the words, but we all agreed it was perfect. As we passed various sailboats, or they passed us, we couldn't help but shouting across how great it was to be out in this Sail for America. Nods and thumbs-up all around.

To increase the challenge for the parade of sailboats, commercial traffic continued to operate in the harbor. This included the arrival of two cruise ships, one from P&O Cruises and the Albatros.

As we were approaching the Intrepid Air and Space Museum, the point where we would turn around and head south, we came across a gaggle of three tallships, all slowly heading up the river, the Bounty, the Kalmar Nyckel, and the Pride of Baltimore II. 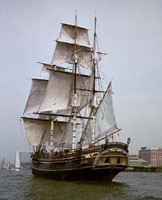 At the Intrepid, we turned left to sail across the River and then turned again to head down river. We saw a pair of very racy looking traditional boats one with a bull on its sail, and the other with a bear on its sail. I wondered if these were similar to a boat I'd seen at Mystic Seaport and sure enough these vessels were sandbaggers with their sail plan based on the vessel at Mystic Seaport called Annie. As we sailed further down the river, a boat was slowly passing us to starboard. I looked across and thought I recognized a woman standing on deck. I turned to Dave and started to say, "Isn't that ...", when across the water I heard, "That's Mark," and sure enough it was Mia on Bright Star. What is the likelihood in all these boats to meet up unexpectedly with someone you know? This was clearly a fantastic day.

Lunchtime, and the turkey cold cuts I brought got left aside, as Annie had brought a veggie platter and a shrimp platter. Soon there were only a few veggies left, and nothing but shrimp tail shells.

We started out tacking back down the river, but it was clear we would have to motor if we were going to get back by a reasonable time. The wind was also building and Annie is not too hot on heeling and bouncy rides so we chose the northern route around Staten Island via the Kill Van Kull and Arthur Kill. We lowered the Memorial Flags and put them in their bags. The wind continued to build and we motored through, dodging the container vessels and tugs with barges that we encountered along the way.

As we headed back, the day became more hazy, and now we began to actually feel the moisture in the air, more like a heavy fog. The sky became threatening and the breeze became cooler as it picked up in velocity. Finally, a little rain shower came through. It was enough to nudge us to don our foul weather gear, and also wash a little of the grime off the boat (the grime resulted from a windstorm on Wednesday). As night fell, we crossed under the Outer Bridge Crossing, the sunglasses came off, and the rain abated. We did take a bit of ribbing for still having our foul weather gear on as we picked up the mooring. It was almost exactly twelve hours since we had started.

We straightened up topsides, and went below to relax and continue to work on the veggies and another platter of shrimp (sailing is hard work!). We caught the launch in, turned in the flags and thus ended our participation in the Sail for America.

Click on anchor to return to main sailing page